So, onto my Design Team card for this week's Tiddly Inks Challenge #159, our fabulous theme this week is 'Super Power'. This is such a cool theme.

So for my card I used the digital stamp called Super Pup, Isn't he just the cutest thing ever! I wanted him to look like he was fly over the card, so I used a strip of acetate to make him hang --- and the best thing is that he actually wobbles so he looks like he's really flying, it's so funny. LOL

Originally I put a sun in the top hand corner, then I changed my mind and decided to make a Superman type badge with a Super Pup logo, I think it's turned out really well. 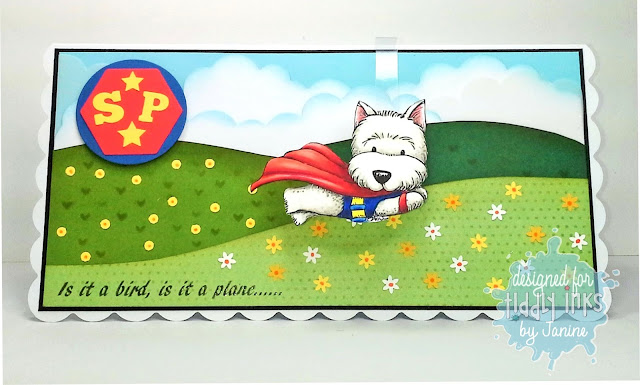 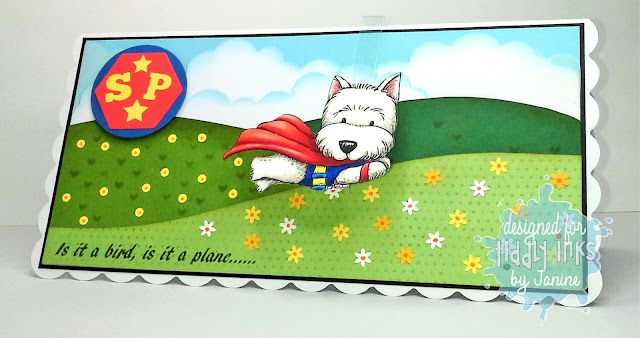 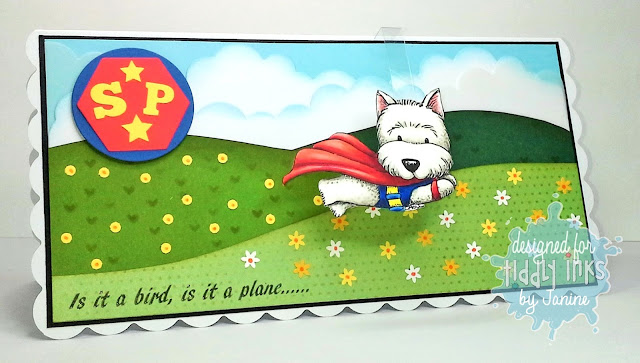 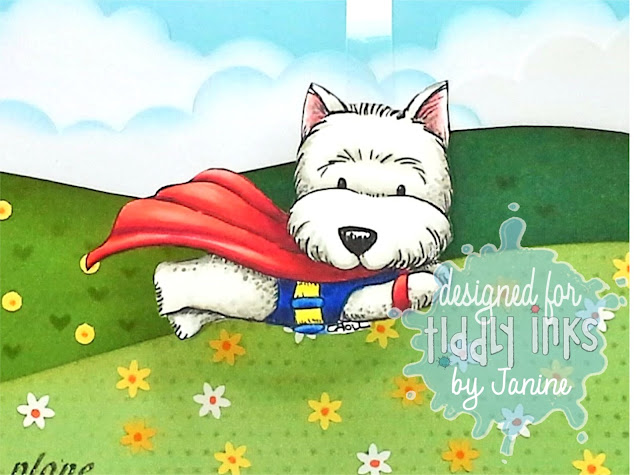 Here's What I Did
I used a white DL scalloped card base. Next I die cut 3 cloud borders from white card and inked up the edges, I then cut a further 2 borders from vellum. The hills were hand cut from 3 green coloured card and stencilled with ink - one of which I pre-printed with my sentiment. Next I printed out my Super Pup and coloured him with Copics, and cut him out. I then made up the countryside scene on the matted blue and black card making sure I tucked the acetate strip behind it, and attached the whole thing to my card base. The pup was then taped to the acetate strip.

To finish off I created a 'SP' badge using die cut elements, and glued punched out flowers to the grassy hills

I hope you'll drop by the Tiddly Inks Challenge Blog to take a peek at what the other lovely Design Team ladies have come up with. I look forward to seeing what you make :)

Oh Em Gee Janine! I absolutely ADORE this hunny, so cute and huge fun and it works BRILLIANTLY. Gosh, I knew you were clever but this is a new level of cleverness. Love love love! Hugs xx

Blooming awesome Janine - I love the flying pup! Ours is tearing round the garden at the moment, having a fruit loop - that's Westies for you!!

Your card has made me smile Janine.... I love how he's flying!!! Clever girl using the acetate strip too... the scene looks fab!

I'm glad you made me smile as I've just looked out of the window and seen one of the little baby blackbirds has ended up dead... it's so sad... as their Mum has been bringing them out and teaching them to feed etc. I don't know how it met it's end, and I know it's nature, but I can't help but feel choked!

Janine your card it's so nice! I love the acetate idea and the Copic coloring of Super Pup. Great job.

Love that Pup is actually flying. And I love the layout too!

jsnine.quinn@gmail.com
and yes my name is spelt correctly - JSNINE :p

JANINE QUINN MIDDLESBROUGH, UK
I'm a 60yo mum and I've been married to my lovely man for almost 34yrs. He puts up with my crafting obsession while I put up with his sporty addiction - it's a match made in heaven. Thank you for visiting my blog and I really appreciate you dropping by. If you wish to contact me just leave me a comment with your email address or use the email link at the top, and I'll get back to you asap. As well as following my blog, you can also follow me on Pinterest. 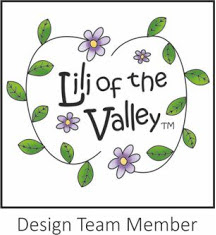 Lili Of The Valley 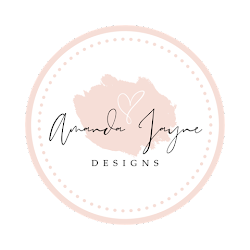 I am a believer in the sharing of crafting knowledge and ideas and would be very flattered if you take inspiration from my work. However, I do ask that you do not copy my work and/or use it and claim it as your own in publications, competitions or for any other purpose. Thank you. 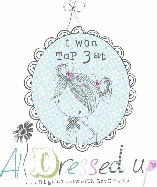 I Made Passion for Promarkers Top 5

This is what's on my Blog